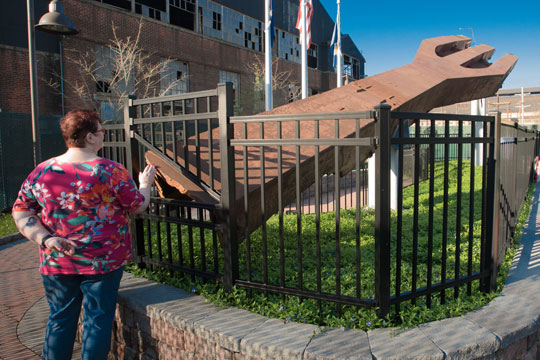 With its beginnings in the early 19th century, the iron and steel industry played a key role in transforming both Pennsylvania and the nation. Coatesville, Pennsylvania is central to this important story. It was here, in 1825, that a female entrepreneur named Rebecca Lukens began managing the mill and created a successful iron-making operation on the Brandywine River.

Since that time, Coatesville has been the site of an unbroken chain of innovation and improvement in the making of iron and steel, from the rolling of plate for America's first iron-hulled vessel in 1825, through improvements in the making of armor plate steel that helped America defend itself in war, to innovations in steel technology that provided the framework of many modern skyscrapers including the World Trade Center. The entrepreneurial creativity of the early steel pioneers has continued right up to the present day in Coatesville.

The Lukens National Historic District illustrates the maturation of Pennsylvania's iron and steel industries. Far from the rural furnaces of Hopewell or Joanna, Lukens represents a post industrial revolution business. Look closely, however, and the same elements of management, worker, community, and trust exist here in the same way they did at earlier sites.

Explore the exhibits in the modern day Visitor Center, the 1901 Lukens Executive Office Building, and the 1943 120" Mill Motor House. Tour the iron master homes, Terracina, built in 1850, and Graystone Mansion, built in 1889.  See the 1739 Brandywine Mansion, home to Rebecca Lukens, one of the nation's first female industrial leaders.