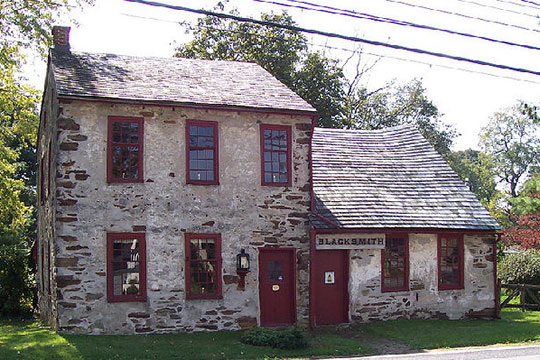 Marshallton Village
The village of Marshallton, originally a Quaker settlement, was first settled in the 1760s. Primarily an agricultural community, the settlement flourished as a crossroad village due to its proximity to Strasburg Road and nearby waterways. Strasburg Road became an official state road in the 1790s. This development established it as the main route between Philadelphia and Lancaster, and further insuring the village as a prime location for industries such as blacksmithing, wheelwriting, cooping and milling. Other businesses included a cigar shop, shoe maker, tin smith and barber.

Marshallton Village was an important stop on the Strasburg Road, a free freight road from Lancaster to Philadelphia. Among the outstanding features of the village is a Quaker Meeting dating to 1722 (present building is 1765), a cradle factory, which made grain cradles and scythes, a blacksmith shop, pump maker, cigar factory, tinsmith shop, clothing store, bakery, the 1829 Methodist Church, and a nearby hotel built in 1765. For an interesting side trip, follow Route 162 to Stargazer Road to visit the Stargazer's Stone, which was the basis for the Mason Dixon Line.

In 1764, English astronomers Charles Mason and Jeremiah Dixon erected this stone 31 miles directly west of an observation tower they built in Philadelphia. Their task was to mark the border between the colonies of Pennsylvania and Maryland. The famous Mason-Dixon Line became known as the boundary dividing free states from slave states prior to the Civil War.

During the American Revolutionary War the iron industry in this region supplied critical munitions to the continental army. The village is located in the most northern section of the Brandywine Battlefield where Generals Washington and Howe met on the filed of battle on September 11, 1777 with 30 thousand soldiers.

Today the village provides and interpretive link between the story of iron and steel production and the American struggle for independence.