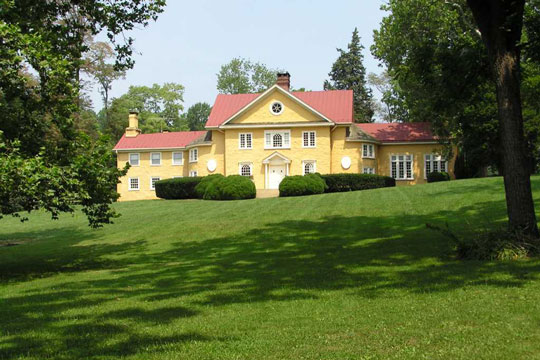 A 19th century iron plantation with over 900 acres, including the 90 acre Chambers Lake, Hibernia features historic ruins along with the iron masters mansion redesigned in the early 20th century to emulate a English county house.

The 1st owner of the property now known as Hibernia was George Harrison, a weaver, who lived here from as early as 1744 until he sold the land to Samuel Downing in the early 1790’s. He may have lived in the part of the mansion that was the original farmhouse. Downing built the 1st iron forge at Hibernia on the West Branch of the Brandywine to convert pig iron into bar iron. The iron works property passed through several ownerships from 1808 until 1821, when Charles Brooke purchased the property and became its most prosperous ironmaster.

By 1850, the Hibernia Iron Works, also known as Hibernia Forge, included two iron forges, two heating furnaces, a rolling mill, grist mill, the mansion, and several houses for the employed families. There was also a farm, gardens, orchards and other improvements. These all helped Hibernia become a self-sustaining operation for the Ironmaster family and hired staff, as well as for the 16 men and boys, their families, and the 18 oxen, horses, and mules which worked at producing the iron.

In addition to other recreational activities, Hibernia County Park offers hiking and walking trails. From Memorial Day to Labor Day walking tours explore the world of the ironmasters who lived at Hibernia.

Chambers Lake is a 90-acre water supply reservoir and regional flood control facility. In 1994, the lake was formed by the construction of Hibernia Dam on Birch Run to provide a supplemental source of local drinking water, and needed flood control for the Brandywine Creek watershed. The lake also offers excellent recreational opportunities, especially fishing, boating, hiking and bird watching.

Hibernia Mansion, long the home of Ironmasters, reflects the lifestyle and social position of those made wealthy by Pennsylvania's iron industry. Gracious living and stylish entertainment occupied those fortunate enough to own iron furnace or forges. In true 19th century style, mansions existed side by side with the iron works. The quiet beauty of the surrounding Hibernia County Park today belies the hustle and smoke of earlier times. Visitors can explore the evolution of the 19th century iron plantation and the legacies of the mansion builders and ironmaster through a self-guided Walking Tour of Hibernia's Historic Ruins, guided mansion tours and special events.

Originally founded by Charles Brooke for his family and the workers at Hibernia Iron Plantation the church is a nice stop after visiting the park. Charles Brooke and other members of his family are buried there. Located next to the park at 220 Hibernia Rd, Coatesville.

Every day looked a lot different at Hibernia Park in the 1800s! Join interpreters to gain an understanding of life on an iron plantation in the early 1800s. Presenters will give you a glimpse at everyday life as they worked, cooked and even played at the Hibernia Iron Works.